Victoria Falls Wildlife Trust assists NGOs and local wildlife authorities with combating wildlife crime. We are on call to rescue wildlife trapped in wire snares, rehabilitate animals that have been confiscated from illegal trafficking operations, and use scientific solutions to combat commercial wildlife poaching.

One of the largest forms of poaching in Africa is the use of wire snares to trap for bushmeat.

One of the largest forms of poaching in Africa is the use of wire snares to trap for bushmeat.  In Zimbabwe, as in many African countries, poverty is a problem and the unemployment rates are over 80%.  People will put out a wire snare to catch antelope or warthogs to be able to feed their families, but unfortunately the snares are not species-specific and so any animal can get trapped.  This is still illegal and can become a bridge to other, more sophisticated forms of poaching.  Some poachers are now using multi-strand wire to catch buffalo and elephant to sell the meat (commercial poaching).

Make a donation to help us treat snared wildlife.

Our team at the Victoria Falls Wildlife Trust has 3 staff (Roger Parry, Jessica Dawson and Dr Chris Foggin (Wildlife Veterinarian)) who are licensed to use dangerous drugs. This means that we are on call to dart and immobilize snared wildlife from anywhere in the Victoria Falls region. Once the animal is immobilized we are able to remove the wire snare, treat the wound and release the animal. Since operating, we have immobilized and removed snares from hundreds of animals, including: giraffe, buffalo, lion, hyena, elephant, kudu, waterbuck, warthog and impala.

Number of animals we have immobilized and de-snared in 2021 so far: 0

Each animal we immobilize requires drugs, medications, sterile equipment, sampling supplies, as well as personnel and vehicle/aerial support. If you would like to support us in our anti-poaching efforts and help us remove wire snares from wildlife, you can do so by donating funds to cover the cost of immobilization equipment.  * The drugs and equipment used to remove the snare from 1 elephant costs approx. USD $250.

Fighting the illegal trade of wildlife and wildlife products

Rhino horn and elephant ivory are well known as being sought after, and within the KAZA region elephant poaching is rising with the increased use of poison. Visit our Wildlife Forensics page to find out how we are using scientific solutions to combat elephant poaching.

However, there are many other species worldwide that constitute the illegal wildlife trade, with the most heavily trafficked mammal being the Pangolin. Pangolins are scaly anteaters found across Africa and parts of Asia. They are nocturnal mammals that primarily feed off of termites and ants, and are heavily trafficked into Asia, where there is a growing demand. In China and Vietnam, pangolin meat is considered a delicacy and their scales are used in medicines to treat a variety of ailments and diseases. According to CITES, between 1999 and 2017, there were estimated to be 1,557 seizure operations involving approximately 192,576 pangolins.

These animals often come to us at the Trust for rehabilitation and care after being seized in ‘Sting Operations’. We will look after them until the case can go to court, as they are also part of the evidence.  We work hard with other NGO’s to push for quick hearing, trials and sentencing so these animals can be released back into the wild as soon as possible.  For pangolin we are often successful in getting 9.5 years, as they are a specially protected species in Zimbabwe. Visit out Wildlife Rescue and Rehabilitation page to read about ‘Moyo’, a juvenile pangolin we rescued from wildlife traffickers in November 2017. 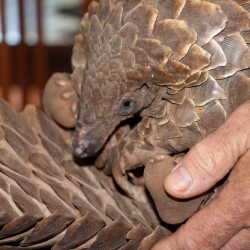